Ice Hockey Wiki
Register
Don't have an account?
Sign In
Advertisement
in: 1943 in hockey, 1944 in hockey, Boston Bruins seasons

The 1943–44 Boston Bruins season was the Bruins' 20th season in the NHL. The Bruins were a high scoring team but the loss of star goalie Frank Brimsek to war service contributed to a steep increase in goals against. The Bruins finished 5th and out of the playoffs for the first time in 10 years.

Bill Cowley had a huge lead in the scoring race and was scoring at a 2 points a game clip heading into Christmas. The press began to talk of a 100 point season until his shoulder was separated on a hit by Jack McLean of the Toronto Maple Leafs on January 8, 1944. He missed 11 games, returned briefly, then missed 3 more to a knee injury. He picked up his torrid scoring pace for the remainder of the season but limited to 36 (of 50) games, he finished 7th in league scoring with 71 points. He finished second in voting for the Hart Memorial Trophy by a very narrow margin. His 1.97 points per game was an NHL record until broken by Wayne Gretzky in 1980-81.

The Art Ross Trophy was taken by teammate Herb Cain whose 82 points was, at the time, a league record. Cain finished as the runner-up for the Lady Byng Memorial Trophy. Art Jackson also finished in the top 10 of league scoring with 69 points. The loss of Frank Brimsek to war service saw the Bruins acquire Bert Gardiner to tend the net. Gardiner would struggle mightily and have the worst goal against average of any starting goalie in Bruins history, 5.17. He retired from pro hockey after the season ended. Gardiner did record an assist on February 29, 1944 versus the Toronto Maple Leafs.

Gardiner was ill for the November 27, 1943 game at Toronto, requiring an emergency substitute. Reverend George Abbott suited up for his only NHL game, faced 52 shots and a one point, was knocked unconscious by a shot from Babe Pratt. Despite his efforts, the Bruins lost 7-4. With Gardiner still unable to play, Maurice Courteau played the next two games. He'd play four more for the Bruins in his only NHL season, sporting a 5.50 GAA.

In a home and home series, Gardiner was injured again during the January 25, 1944 game against the Detroit Red Wings at Boston. The Bruins were forced to employ the Wings Jimmy Franks for the return game in Detroit, which they lost 6-1. The last game of the season saw the Bruins use only 9 skaters and the loan of Leafs goalie Benny Grant in a 10-2 loss to Toronto.

Due to the weakening of talent, especially in goaltending, and lack of parity in the league, the Bruins experienced a boon of hat tricks and 4 goal games (see Trivia). The 10-9 win over the New York Rangers on March 4, 1944 and the 10-9 loss to the Detroit Red Wings on March 16, 1944 were the highest scoring games in Bruins history.

Reverend George Abbott was forced into service during a 7-4 loss to the Leafs, November 27, 1943.

Program from the February 24, 1944 charity game in Ottawa featuring a Royal Canadian Air Cadet on the cover. 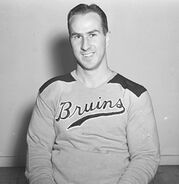