The 1942 Stanley Cup Final was a best-of-seven series between the Toronto Maple Leafs and the Detroit Red Wings. After losing the first three games, the Maple Leafs won the next four to win the series 4–3, winning their fourth Stanley Cup.

Toronto defeated the New York Rangers in a best-of-seven 4–2 to advance to the finals. The Red Wings had to play two best-of three series; winning 3–1 against the Montreal Canadiens, and 2–0 against the Boston Bruins.

This was the series of the remarkable comeback. Toronto came back from a 3–0 deficit to win the best-of-seven series, the only such occurrence in a Stanley Cup Final series as of 2020.

After losing the first 3 games, Toronto coach Hap Day replaced regulars Bucko McDonald and Gordie Drillon with Don Metz and Hank Goldup for Game 4. This was the turning point in the series as Don Metz (brother of Leafs Nick Metz) scored the winner as the Leafs took the game by 4-3. The game ended in total chaos as not happy with the officiating, Detroit took two misconduct penalties in the final minutes. As the game ended, Detroit coach Jack Adams physically assaulted referee Mel Harwood. Harwood and NHL President Frank Calder had to be escorted out of the building by police. Adams was suspended for the rest of the series.

Game 6 saw Turk Broda shutout the Red Wings and Don Metz scored the winner as the Leafs tied the series with a 3-0 victory.

Game 7 in Toronto was the first time a crowd of over 16,000 attended a hockey game in Canada. Detroit survived being two men down in the scoreless first period, then struck early in the second period on a goal by Syd Howe. Sweeney Schriner scored on a scramble in front of the net to tie the score. Two minutes later, Pete Langelle scored the winner. The Maple Leafs dominated the rest of the game with Schriner scoring again at 16:11 of the third period to secure the win and the Cup. 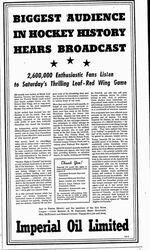