This is the 1942-43 season of the Saskatchewan Senior Hockey League:

Note: Mossbank RCAF Gunners withdrew on December 8, 1942, after losing 18-1 to Regina on December 5th. Their record was erased.

Note: Yorkton Wings withdrew from the league at the end of the season, rather than play a semi final against Regina.

Because of World War II, many players who would otherwise be playing in the National Hockey League were restricted to Canada. They were either in military training or held essential war jobs. Many of these former pros were reinstated as amateurs and played in senior leagues such as this one.

An all-star game was arranged to be played between a team of these former pros and a team of amateurs, all from this Saskatchewan League and local junior teams. The proceeds went to the Aid to Russia fund. The epic Battle of Stalingrad was being fought.

The game was played in Saskatoon on February 3, 1943. The amateurs beat the pros 10-5. According to a report, not a single bodycheck was handed out in the game, and "the fans were treated to a thrilling spectacle of high speed and clever passing plays." 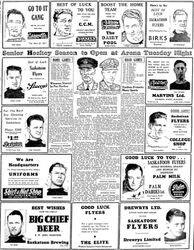 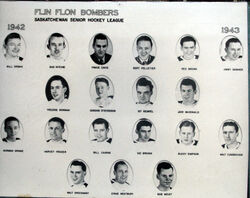 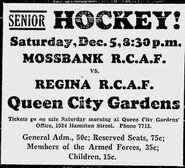 Mossbank @ Regina This game was postponed and moved to Moose Jaw 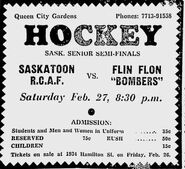 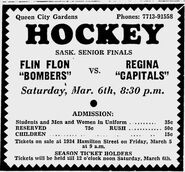 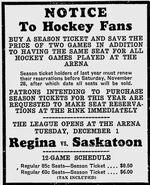