Ice Hockey Wiki
Register
Don't have an account?
Sign In
Advertisement
in: Montreal Canadiens seasons, 1942 in hockey, 1943 in hockey

The 1942–43 Montreal Canadiens season was the 34th season in franchise history. The Canadiens finished 4th in the league and lost in the Semi-finals to the Boston Bruins 4 games to 2.

The Montreal Canadiens held their training camp at first at the Verdun Auditorium and then moved to the Montreal Forum as ice became available there. They shared the Forum with the Boston Bruins.

They played a total of six exhibition games, compiling a 4-1-1 record.

Note: The Canadian Army All-Stars were made up of players from Montreal Army and the Ottawa Commandos.

The Montreal Canadiens were still making progress, and coach Dick Irvin put together the first "Punch Line" of Elmer Lach, Toe Blake and Joe Benoit. Benoit became the first Canadien to hit the 30 goal plateau since Howie Morenz did it in 1929–30 (40 goals), scoring an even 30. Gordie Drillon also added some scoring power. Rookie Maurice Richard showed promise, but broke his leg. The Canadiens made the playoffs by one point and bowed out in the playoffs' first round. Alex Smart scored three goals in his NHL debut.[1]

In their fourth playoff meeting and first since 1930-31, the Bruins defeated the Habs in a tight series in which three games went to overtime. It would be another 45 years before the Bruins beat Montreal in a playoff series.

Game 1 saw the Habs take a 3-0 lead in the second period. Goals by Don Gallinger and a power play goal by Art Jackson cut the lead to 3-2 heading into the third. Dutch Hiller put Montreal up 4-2 but goals by Oscar Aubuchon (the only playoff goal of his career) and the indomitable Bill Cowley sent the game into overtime with a power play goal with 4 minutes left in regulation. Gallinger's second goal of the game 12:30 into the first OT was a wraparound that beat Paul Bibeault and sent the crowd home happy as the Bruins took a 1-0 lead in the series.

Game 2 was the reverse of game 1 in that the Bruins held a 4-0 lead in the third period on goals by Gallinger, Ab DeMarco, Jackson and Herb Cain. With a little less than 6 minutes remaining in the game, Jack Crawford took a minor penalty and Montreal mounted a furious comeback, scoring 3 power play goals in less than 2 minutes, two by Gordie Drillon and one by Toe Blake (NHL game sheets and newspaper accounts confirm this but it isn't noted in some other sources). But Jackson's second of the game with little over a minute remaining gave the Bruins a 5-3 win and a 2-0 lead in the series.

Game 3 saw the series switch to the Montreal Forum where encouraged by the home crowd, Elmer Lach and Drillon's third of the series spotted the Habs a 2-0 lead in the second period. Herb Cain cut the lead in half and Dit Clapper scored the tying goal in the last minute of the third period. Flash Hollett took a penalty 1:30 into the first overtime but veteran Busher Jackson was not deterred. While killing the penalty, he grabbed the puck at center ice, crossed the blue line and threw a shot which Bibeault couldn't control. Jackson pounced on the rebound and scored a shorthanded goal, giving the Bruins a 3-2 win and a 3-0 stranglehold on the series.

Game 4 would be the Habs only victory of the series. With Bruins all-star defenseman Jack Crawford out due to injury and Bill "Red" Anderson playing the only game of his NHL career subbing for Crawford, the Habs won handily 4-0 on goals by Jack Portland, Toe Blake (his 4th of the series), Buddy O'Connor and Joe Benoit. Paul Bibeault earned the shutout and the Bruins led the series 3-1.

Game 5 saw the series back in the Boston Garden where the teams traded goals. Montreal held a 4-3 lead going into the third period on goals by Elmer Lach, two by O'Connor and one by Drillon. Dit Clapper, Murph Chamberlain (assisted by Flash Hollett, his 8th assist of the series) and Cain's third of the series were Boston's counters. Cain scored his fourth at 9:49 of the third to tie the game and send it into overtime. 3:41 in the first OT, Ab Demarco scored his second of the series to win it for the Bruins.

The Canadiens participated in a three team tournament in April that took place in southern California. The other teams were Victoria Navy, a senior team that played in the Vancouver Island Senior League and the San Diego Skyhawks of the Southern California Hockey League. These two teams were reinforced by NHL players, most notably the Bentley brothers, Reg, Doug, and Max Bentley.

The proceeds of the games went to war charities. 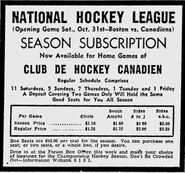