The 1941 Stanley Cup Final was a best-of-seven series between the Boston Bruins and the Detroit Red Wings. Boston would win the series 4–0 to win their third Stanley Cup.

Boston defeated the Toronto Maple Leafs in a best-of-seven 4–3 to advance to the finals. The Red Wings had to play two best-of three series; winning 2–1 against the New York Rangers, and 2–0 against the Chicago Black Hawks.

Game 4 in Detroit saw the Wings go up 1-0 in the first period on a goal by Carl Liscombe, his 4th of the playoffs. The Wings held the Bruins off until Jimmy Orlando took a penalty in the second penalty. Hollett and Bauer both scored on the power play, Bauer's goal a rebound his slid under Mowers after he couldn't control a Schmidt shot. With a minute left in the second period, Wiseman raced down the left wing and fired a shot over Mower's shoulder to make the Bruins lead 3-1. Neither team scored in the third period and the Bruins took the Cup. Players from both teams milled around center ice, shaking hands until the presentation was made. This was the Bruins second Stanley Cup in three seasons and third in franchise history. Eddie Wiseman led the playoffs in goals with 6 while Milt Schmidt was the scoring leader with 14 points. 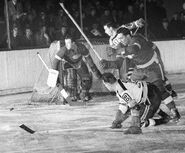 Mel Hill takes a shot on Johnny Mowers in Game 1.

Cowley, Clapper and Crawford with the Cup in Boston.

Retrieved from "https://icehockey.fandom.com/wiki/1941_Stanley_Cup_Finals?oldid=670491"
Community content is available under CC-BY-SA unless otherwise noted.