The 1941–42 Toronto Maple Leafs season was Toronto's 25th season in the NHL. The Maple Leafs finished 2nd in the league and won the 1942 Stanley Cup Finals 4 games to 3 over the Detroit Red Wings after losing the first three games. It was their first Cup win since 1932.

Before Smythe left to take up training with his 30th Battery, he signed up three rookies to the Maple Leafs: Bob Goldham, Ernie Dickens and John McCreedy. Lorne Carr's contract was purchased from the New York Americans. The final addition to the team was Pete Langelle, who made the team after playing part-time in previous seasons.[1]

Toronto got off to a quick start, winning 14 of their first 19 games, battling with the Boston Bruins and New York Rangers for top spot in the NHL. A 4–7–3 slump in their next 14 games saw Toronto fall behind the Bruins and Rangers, however, the Leafs followed up their slump by posting a 7–1–0 record in their next 8 games, before dropping 5 of final 7 games to end the season. Toronto finished the year with a record of 27–18–3, recording 57 points, and finishing in second place in the NHL, three points behind the first place New York Rangers.

The Leafs offense was led by Syl Apps, who despite missing 10 games to injuries, finished tied for the club lead in points with 41. Gordie Drillon also finished with 41 points, and he scored a team best 23 goals, while Billy Taylor had a club high 26 assists. Sweeney Schriner managed to join Drillon in the 20 goal club, as he managed to get 20 goals and earned 36 points. Bucko McDonald led the Leafs blueline, recording 21 points, while Rudolph Kampman provided the team toughness, getting 67 penalty minutes.

In goal, Turk Broda got all the action, winning 27 games and posting a 2.76 GAA, along with earning 6 shutouts.

The Maple Leafs would open the playoffs against the best team in the league, the New York Rangers in a best of seven semi-final series. The Leafs opened the series with a victory at Maple Leaf Gardens with a solid 3–1 win, then managed to go up two games by defeating the Rangers 4–2 at Madison Square Garden. New York managed to take the third game, shutting out Toronto 3–0, however, the Leafs would go up 3–1 in the series, winning the fourth game 2–1 at home. New York staved off elimination in the fifth game, holding off Toronto for a 3–1 win, however, the Leafs ended the series in the sixth game, hanging on for a 3–2 victory, and a spot in the Stanley Cup Finals.

The 1942 Stanley Cup Finals involved a remarkable comeback. Toronto came back from a 3–0 deficit to win the best-of-seven series, the only such occurrence in a Stanley Cup Final series as of 2020.

After losing the first 3 games, Toronto coach Hap Day replaced regulars Bucko McDonald and Gordie Drillon with Don Metz and Hank Goldup for Game 4. This was the turning point in the series as Don Metz (brother of Leafs Nick Metz) scored the winner as the Leafs took the game by 4-3. The game ended in total chaos as not happy with the officiating, Detroit took two misconduct penalties in the final minutes. As the game ended, Detroit coach Jack Adams physically assaulted referee Mel Harwood. Harwood and NHL President Frank Calder had to be escorted out of the building by police. Adams was suspended for the rest of the series.

Game 6 saw Turk Broda shutout the Red Wings and Don Metz scored the winner as the Leafs tied the series with a 3-0 victory.

Game 7 in Toronto was the first time a crowd of over 16,000 attended a hockey game in Canada. Detroit survived being two men down in the scoreless first period, then struck early in the second period on a goal by Syd Howe. Sweeney Schriner scored on a scramble in front of the net to tie the score. Two minutes later, Pete Langelle scored the winner. The Maple Leafs dominated the rest of the game with Schriner scoring again at 16:11 of the third period to secure the win and the Cup. 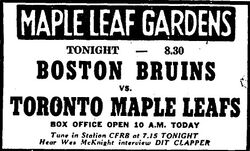 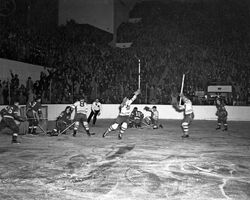 Retrieved from "https://icehockey.fandom.com/wiki/1941–42_Toronto_Maple_Leafs_season?oldid=725949"
Community content is available under CC-BY-SA unless otherwise noted.