The 1941–42 Montreal Canadiens season was the 33rd season in franchise history. The team finished 6th in the league and lost in the Quarter-finals to the Detroit Red Wings 2 games to 1.

Frank Patrick suffered a heart attack and had to sell his interest in the Montreal Canadiens, and the Habs almost had to move to Cleveland. But Tommy Gorman kept the team alive. They added Emile "Butch" Bouchard to start his great career on defence and another very good player, Buddy O'Connor, at centre. Montreal had goaltending problems as Bert Gardiner slumped, and rookie Paul Bibeault replaced him. He showed flashes of brilliance, but his inexperience showed. Joe Benoit starred with 20 goals, the first Canadien to do that since 1938-39, when Toe Blake did it. 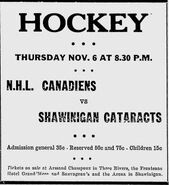 Action between Brooklyn and the Montreal Canadiens during the 1941-42 season.