The 1940–41 Toronto Maple Leafs season was Toronto's 24th season in the NHL. The Maple Leafs finished 2nd in the league and lost in the Semi-finals to the Boston Bruins 4 games to 3.

Conn Smythe was making preparations for his eventual tour of duty in Europe. He felt that Dick Irvin would not be strong enough to deal with player issues while he was gone and Smythe convinced the Montreal Canadiens to hire Irvin.[1] Smythe hired Hap Day as coach.

A two game road trip for the Boston Bruins began in Toronto on December 7, 1940. Holding a 2-1 lead on goals by Woody Dumart and Jack Shewchuk, Leafs Gordie Drillon tied it up in the third period. With minutes left, Flash Hollett missed on a breakaway and Hank Goldup won the game 3-2 for Toronto on the next rush.


With a week until their next game, Bruins GM Art Ross called up Terry Reardon and Gordie Bruce. Reardon played his first NHL game on December 17, 1940 match against Toronto, replacing Herb Cain on the third line. By all accounts Reardon had a strong debut but it was Bill Cowley who paced the Bruins to a convincing 5-2 win, extending his hold on the scoring lead. This ended the Leafs eight game winning streak.


Trailing the Bruins by one point, and with the Bruins undefeated in 21 games, the Maple Leafs were doubly motivated to triumph during the February 18, 1941 game in Boston. The goalies were the stars of the game as Frank Brimsek made 38 saves while Turk Broda turned aside 49 as the teams tied 2-2. Syl Apps and Art Jackson each scored twice and a scuffle between Milt Schmidt and Wally Stanowski resulted in a major penalty to the latter for clubbing Schmidt over the head. Brimsek made an incredible save on Gordie Drillon in overtime while Bill Cowley was in the penalty box to keep the streak alive.

The Bruins finished 5 points ahead of the Leafs during the regular season. Despite effectively losing league leading scorer Bill Cowley for the playoffs in Game 1, the Bruins prevailed in seven games. 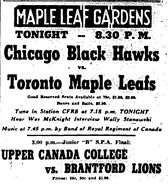 Semi Final @ Toronto
Add a photo to this gallery

Retrieved from "https://icehockey.fandom.com/wiki/1940–41_Toronto_Maple_Leafs_season?oldid=729658"
Community content is available under CC-BY-SA unless otherwise noted.