The 1940–41 Montreal Canadiens season was the 32nd season in club history. The Canadiens finished 6th in the league and lost in the Quarter-finals to the Chicago Black Hawks 2 games to 1.

The Montreal Canadiens had hit the bottom in 1939-40, and were in financial trouble. Frank Patrick decided to become an investor and governor for the team, and Tommy Gorman was hired as general manager. He hired recently released Toronto coach Dick Irvin to run the team. One of the first things Gorman and Irvin did was scout for players, and the Canadiens came up with Johnny Quilty, Joe Benoit, Elmer Lach and defenceman Ken Reardon. Bert Gardiner would be used in goal, replacing Claude Bourque and Wilf Cude. Murph Chamberlain was bought from Toronto to bolster the offence.

Opening night was on November 3, 1940 against the Boston Bruins. The game was hard fought and after Toe Blake put the Habs up 1-0, Milt Schmidt rounded the Canadiens net and jammed a shot in off goalie Bert Gardiner's back to tie the score. Herb Cain hit the post in the last frame and the game ended 1-1. Habs coach Dick Irvin commented that he'd never seen a team in such good shape as the Bruins. [1]

Quilty and Benoit came through, as did Toe Blake, but the Habs had a long way to go, finishing sixth. Quilty won the Calder Memorial Trophy as the league's top rookie. In fact, before the season started, Coach Irvin handed a sealed envelope to a reporter of his guess who would win the Calder Trophy, and when the season ended, the reporter opened the envelope: Johnny Quilty was the choice Irvin made. 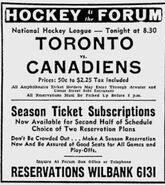