The 1939 Stanley Cup Final NHL championship series was contested by the Boston Bruins and the Toronto Maple Leafs. It was Boston's first appearance in the Final since 1930. Toronto had appeared in the 1938 Final. Boston would win the series 4–1 to win their second Stanley Cup. It was the first best-of-seven Stanley Cup Final series.

Boston defeated New York Rangers in a best-of-seven 4–3 to advance to the Final. The Maple Leafs had to play two best-of three series; winning 2–0 against New York Americans, and 2–1 against the Detroit Red Wings.

The Bruins went into the series the favorites.

Game 1 in Boston was a tight-checking affair with Woody Dumart opening the scoring at the 16:04 mark of the first period with the first playoff goal of his career. The Leafs tied it up in the third with the first of the playoffs for Red Horner but less than three minutes later, Bobby Bauer won it for the Bruins.

Game 2 in Boston saw the Leafs built a 2-0 lead in the first period on goals by Gordie Drillon and Syl Apps. Roy Conacher and Semi-Final hero Mel Hill tied it up in the second. After a scoreless third period, Toronto had to kill off a penalty by Rudolph Kampman after which Doc Romnes scored the OT winner to knot the series 1-1.


Game 3 in Toronto was scoreless in the second period when Eddie Shore checked Leafs star Busher Jackson, dislocating his shoulder. Jackson missed the remainder of the series. Disheartened, the Leafs gave up goals by Bauer, Conacher and defenseman Jack Crawford (first playoff goal of his career). A last minute goal by the Leafs Gus Marker wasn't enough as the Bruins won 3-1.

Game 4 in Toronto saw the Bruins go ahead 1-0 early in the game on a power play goal by Conacher, assisted by Hill. The Bruins Frank Brimsek shut the door and earned his first playoff shutout as the Bruins won 2-0 after Conacher added his second of the game, assisted by Hill and Bill Cowley.


Game 5 in Boston saw Hill score his 6th of the playoffs at 11:40 of the first period while Gord Drillon was in the penalty box. Toronto countered with a power play marker of their own when Kampman scored at 18:40 on a point shot, that deflected off Dit Clapper's skate, with Hill in the box. With the score tied 1-1 late in the second period, Conacher broke in on a breakaway and fired the puck over Broda's left shoulder, his 6th goal of the playoffs. This put the Bruins up 2-1, which would prove to be the winner. The Leafs frantically tried to tie it up in the third and had a perfect opportunity when Eddie Shore took a penalty with 2 minutes to go. However, the Leafs Nick Metz, who'd been called up as Busher Jackson's replacement, took a penalty and the teams skated four on four. With 37 seconds left, Flash Hollett widened Boston's lead to 3-1. The Bruins took the series and the Cup 4 games to 1. Frank Brimsek held Toronto to just six goals in five games. Bill Cowley led the playoffs in scoring with 11 assists and 14 points.

The Kraut Line in action from a 1939 Finals game in Boston, assisted by #12 Flash Hollett.

Frank Brimsek makes a save in a 1939 Finals game in Boston while #2 Eddie Shore, #10 Bobby Bauer look on. 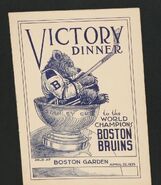 Program from the Victory Dinner.