The 1939-40 NHL season was the 23rd season for the National Hockey League. Of the league's seven teams, the Boston Bruins were the best in the 48-game regular season, but the Stanley Cup winners were the New York Rangers, who defeated the Toronto Maple Leafs in the best-of-seven Finals 4-2 for their third Stanley Cup in 14 seasons of existence. It would be another 54 years before their fourth.

The tragic death of Babe Siebert in a drowning accident led to a memorial game at the Montreal Forum on October 29, 1939. The game raised over $15,000 to benefit Siebert's wife, who was paralyzed after giving birth to their second daughter. A team of All-Stars defeated the Montreal Canadiens 5-2.

The New York Americans, in financial trouble, decided to trade their star left wing Sweeney Schriner to Toronto for Harvey "Busher" Jackson, Buzz Boll, Murray Armstrong, and minor-leaguer Jimmy Fowler. Late in the season, they traded Eddie Wiseman and $5000 to Boston for Eddie Shore. The Americans then managed to make the playoffs by finishing a poor sixth. They also obtained Charlie Conacher and used him as a defenceman.

Before the December 19, 1939 game at Boston versus the Boston Bruins, Conn Smythe puts an ad in the Boston Globe which states "Attention Hockey Fans! If you're tired of seeing the kind of hockey the Boston Bruins are playing, come to the Garden tonight and see a real hockey club, the Toronto Maple Leafs." The Bruins win 3-2 in overtime.

The first place Boston Bruins had a new coach in Cooney Weiland, their one-time captain, and were once again led by their "Kraut Line", Milt Schmidt, Woody Dumart, and Bobby Bauer as they finished 1-2-3 in overall league scoring and Bruins Bill Cowley finishes 4th. Unfortunately, the potent four were unable to help the Bruins get past the first round of the playoffs as the injury-riddled Bruins lost in 6 games to the Rangers.

The New York Rangers were coasting in first place and went 19 consecutive games without a loss. They slumped in the second half, though, and Boston edged them out for first place.

The New York Rangers-Montreal Canadiens 6-2 game on February 25 1940 was the first ice hockey game ever in the USA to be shown on TV.

The Boston Bruins were expected to make the Stanley Cup finals after a first overall finish during the regular season riding the shoulders of the "Kraut Line". But the New York Rangers were too much for the Bruins who lost in six and were out-scored 14 to 8 and shut-out twice in the first round. The third seed Toronto Maple Leafs swept the Detroit Red Wings and Chicago Black Hawks en route to the Stanley Cup finals.

The league's two best teams met in the second round of the playoffs, both teams having received byes in the first round. The Bruins lost 4 players to injury during the series. The Rangers held league leading scorer Milt Schmidt off the score sheet for the series and won 4-2, with goalie Dave Kerr posting three shutouts. The Rangers would go on to the beat the Leafs in the Finals.

Game 1 at Madison Square Garden was dominated by the Rangers. After Phil Watson put the Rangers up 1-0 in the second period, the "Bread Line" of Alex Shibicky, Neil Colville and Mac Colville took over. Combining for 7 points on a goal by Shibicky and two by Mac, the Rangers blanked the Bruins 4-0 with Dave Kerr earning the shutout.

Game 2 in Boston was special teams battle. A huge brawl in the first period saw seven players in the penalty box after which Mac Colville scored a Shorthanded goal. The Bruins special teams took over in the second period. Power play goals by Flash Hollett and Woody Dumart and a shorthanded goal by Herb Cain spotted them a 3-1 lead. The Rangers Dutch Hiller made it close at 9:56 of the third but Art Jackson sealed the Bruins 4-2 victory with a late goal. The Bruins Mel Hill broke his ankle and was lost for the remainder of the series.

Game 3 in Boston was a close affair with the team trading goals throughout the game. A pair by Eddie Wiseman, who opened the scoring at 7:21 of the first and netted the winner at 7:49 of the third period was the difference as the Bruins took game 3 by a 4-3 score and led in the series 2-1.

Game 4 in New York was a goaltending duel between Frank Brimsek and Kerr with the Rangers prevailing 1-0 on a 40 foot shot by Muzz Patrick at 10:40 of the third period to tie the series 2-2. The Bruins lost defenseman Des Smith to injury for the remainder of the series.

Game 5 in Boston was a repeat of Game 4 but with Babe Pratt scoring the game's only goal at 4:27 of the third period on a two on one with Alex Shibicky. The Bruins Art Jackson broke his ankle in the first period. With 20 seconds left, the Bruins pulled Brimsek for an extra attacker but to no avail. Dit Clapper hurt his ankle at the end of the game and wouldn't play in Game 6.

Game 6 in New York saw the Bruins go ahead 1-0 on a late first period goal by Roy Conacher assisted by Art Jackson's replacement Terry Reardon. But the shorthanded Bruins, playing without Jackson, Des Smith, Mel Hill and Clapper couldn't hold off the Rangers and Alf Pike tied it up in the second period. In the third, Alex Shibicky scored to make it 2-1 and in the process Robert "Red" Hamill took a major penalty for high-sticking and broke Shibicky's nose. The Rangers capitalized on the power play with goals by Clint Smith and Phil Watson to win the series with a 4-1 victory in front of their home town faithful.

The following is a list of players of note who played their first NHL game in 1939-40 (listed with their first team, asterisk(*) marks debut in playoffs):

The following is a list of players of note that played their last game in the NHL in 1939-40 (listed with their last team):

Mel Hill dressing in 1939, showing the paucity of equipment protection. 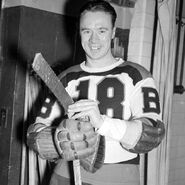 A minute of highlights of the March 19, 1940 Semi-finals Game 1 which the Rangers won over the Bruins 4-0 on their way to winning the Stanley Cup. Second period goals by Phil Watson and Alex Shibicky are shown.

Retrieved from "https://icehockey.fandom.com/wiki/1939-40_NHL_season?oldid=683807"
Community content is available under CC-BY-SA unless otherwise noted.