The 1939–40 Montreal Canadiens season was the 31st season in franchise history. The Canadiens finished 7th in the league and did not qualify for the playoffs for the first time since the 1935-36 season.

The Canadiens held their training camp in Montreal, Quebec.

The New York Rangers-Montreal Canadiens 6-2 game on February 25, 1940 was the first ice hockey game ever to be shown on TV in the USA. 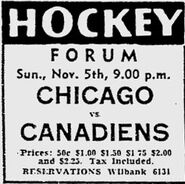 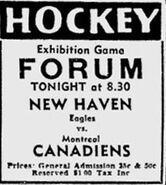