Ice Hockey Wiki
Register
Don't have an account?
Sign In
Advertisement
in: Chicago Blackhawks seasons, 1939 in hockey, 1940 in hockey

The 1939–40 Chicago Black Hawks season was the team's 14th season in the NHL. Paul Thompson, who finished the previous season as a player-coach with the Hawks, would retire from playing and become the full time head coach of the team, and Chicago responded, as they improved by 20 points, finishing above .500 for the first time since 1935–36, and having their highest point total since 1934–35, as they would have a 23–19–6 record for 52 points, good for 4th in the league. The Hawks lost in the Quarter-finals to the Toronto Maple Leafs 2 games to 0.

The Black Hawks held their training camp in Hibbing, Minnesota.

Rookie Doug Bentley would lead the team with 12 goals, while Cully Dahlstrom would have team highs in assists (19) and points (30). Joe Cooper led all defensemen with 11 points and had a team high 59 penalty minutes, while fellow blueliner Earl Siebert had another productive season, earning 10 points, despite missing some time due to injuries.

In goal, Mike Karakas would begin the season as the starter, however, after 17 games, he was loaned to the Montreal Canadiens for the remainder of the year after posting a 7–9–1 record and a 3.31 GAA. Paul Goodman would then be named the Hawks starting goalie, and he would respond with a 16–10–5 record, and a team high 1.94 GAA.

Chicago would return to the playoffs after a 1 year absence, as they would face the 3rd place team, the Toronto Maple Leafs in a best of 3 series in the 1st round. The Leafs would win the first game of the series by a score of 3–2 in OT at Maple Leaf Gardens on a goal by Syl Apps. Toronto would then eliminate Chicago by a 2–1 score in Game 2 at Chicago Stadium.

The Black Hawks went to Vancouver to play a five game series against the Vancouver Lions of the Pacific Coast Hockey League. 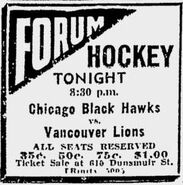