The 1938 World Ice Hockey Championship was held in Prague, Czechoslovakia.

+ Germany, Switzerland and Sweden ended with identical records. The Organizing Committee awarded the semifinal position to Germany because it had played Canada.

Canada was represented by the Sudbury Wolves. 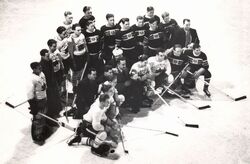 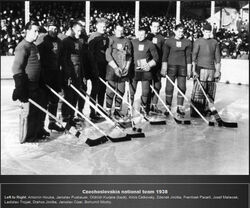 Czechoslovakia
Add a photo to this gallery
Retrieved from "https://icehockey.fandom.com/wiki/1938_World_Championship?oldid=400161"
Community content is available under CC-BY-SA unless otherwise noted.