This is the 1938-39 season of the West Kootenay Hockey League:

Note: The Trail Smoke Eaters were in Europe for the World Championships. The Trail Blazers took their place.

Since this was the only senior league in British Columbia, the Kimberley Dynamiters advanced to the 1938-39 Western Canada Allan Cup Playoffs.

The leading scorer was Ralph Redding of Kimberley with 19 goals and 10 assists for 29 points. He also led in goals. Redding had also won the scoring titile last season.

Second was Jack Kilpatrick of Nelson with 10 goals and 17 assists for 27 points. He led in assists.

Buddy Hammond of Nelson was third with 18 goals and 6 assists for 24 points. 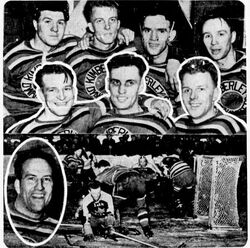 Kimberley Dynamiters
Add a photo to this gallery

Retrieved from "https://icehockey.fandom.com/wiki/1938-39_WKHL_Season?oldid=603882"
Community content is available under CC-BY-SA unless otherwise noted.