This is the 1938-39 season of the Provincial Senior League:

Drummondville, Granby, and the Montreal teams dropped out.

Originally there was to be a team from Springfield, Massachusetts. However, that was withdrawn before the season started.

The Lachine Rapides were admitted and were to play in the brand-new 3000 seat Lachine Arena. The Shawinigan Falls Cataractes also joined. 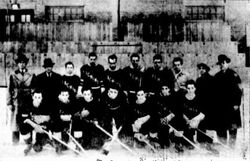 Cornwall Flyers
Add a photo to this gallery 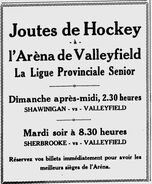 Valleyfield vs Shawinigan
Add a photo to this gallery

Retrieved from "https://icehockey.fandom.com/wiki/1938-39_PSHL?oldid=644058"
Community content is available under CC-BY-SA unless otherwise noted.