The 1938–39 New York Americans season was the Americans' fourteenth season of play. The Americans finished 4th in the league and lost in the Quarter-finals to the Toronto Maple Leafs 2 games to 0.

The Americans played a four game series against the New York Rangers in Western Canada:

The Rangers swept the series 4 wins to none. 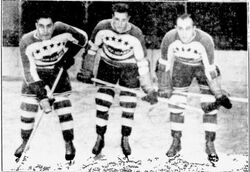 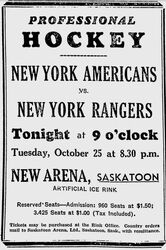 A minute worth of footage from the home opener of the Chicago Black Hawks which they won over the Americans 6-1. First period goals by Cully Dahlstrom and Johnny Gottselig are shown.

A minute worth of footage from the Americans home opener on November 13, 1938 in which they defeated the Boston Bruins 2-1. The Americans goals by #9 Lorne Carr and #10 Eddie Wiseman are shown. Both teams play in white jerseys making it a challenge to distinguish between them at times. The end of the clip shows Milt Schmidt setting up Bobby Bauer who nearly scores. Schmidt then bodychecks an American player and appears hurt.

Retrieved from "https://icehockey.fandom.com/wiki/1938%E2%80%9339_New_York_Americans_season?oldid=691405"
Community content is available under CC-BY-SA unless otherwise noted.