Ice Hockey Wiki
Register
Don't have an account?
Sign In
Advertisement
in: Montreal Canadiens seasons, 1938 in hockey, 1939 in hockey

The 1938–39 Montreal Canadiens season was the 30th season in club history. The Canadiens finished 6th in the league and lost in the first round to the Detroit Red Wings 2 games to 1.

A tight-checking game in Montreal against the Boston Bruins on December 15, 1938 saw the "B's" without Bill Cowley and Jack Shewchuk, who'd been sent back to the minors. Scoreless until the third period, when Cooney Weiland deked out Walter Buswell and then flipped the puck over Claude Bourque, the Habs then turned it on. After firing a shot at Frank Brimsek, Babe Siebert bowled him over, clearing the net but Eddie Shore stopped the rebound. Canadiens coach Cecil Hart played four forwards for the last six minutes of the game. Rod Lorrain had the best scoring chance as he fired a shot from in close that Brimsek was screened on but managed to kick out. The Bruins held on for a 1-0 win, Brimsek's fourth shutout in five games and fifth consecutive victory.

The Habs came to the Hub on January 24 with Cooney Weiland still out and acting as coach. Canadiens GM/coach Cecil Hart professed that he had the formula to defeat the Bruins, by coming out hard for the first 10 minutes of the game.[1] The Bruins took Hart's advice, dominated the game early and built a 3-1 lead going into the third period. However, Montreal tied it up and as momentum shifted to their favour, Roy Conacher took a penalty. Weiland sent Milt Schmidt and Flash Hollett out to kill it off. They did so and then some as Schmidt scored shorthanded, followed by Hollett 29 seconds later. The teams then traded goals as the Bruins won 6-4. Hart was fired following the game and replaced with Jules Dugal.[2]

Before the Bruins headed to Montreal for a game on February 16, 1939, Jack Shewchuk was sent to the minors. After Bobby Bauer put Boston up early in the first, the game turned rough, resulting in a slew of injuries. Habs Jimmy Ward dislocated his shoulder and was lost for the season while Walter Buswell suffered a concussion and Babe Siebert a hip injury, knocking all three players out of the game. By 10:35 of the third period, Rod Lorrain cut the "B's" lead to 2-1, but then referee Norm Lamport gave two Habs misconducts. Down five men, several fans went so enraged they jumped onto the ice after Lamport and had to be stopped by the players of both teams. Roy Conacher, Jack Portland and Dit Clapper scored in the last five minutes, resulting in a 5-1 Bruins win. After the game, it was discovered that Eddie Shore had played with a broken toe.[3]

The NHL revised its playoff format and six of seven teams qualified for the playoffs. In the first round, the Canadiens met the Detroit Red Wings, who had finished in fifth place. 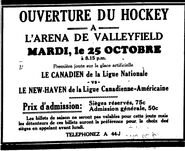 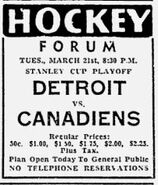