This is the 1937-38 season of the Saskatchewan Junior Hockey League:

There were seven teams that registered with the Saskatchewan Amateur Hockey Association (SAHA) at the junior level. One league was organized with four teams. The league winner and the other three teams participated in the provincial playoffs organized by the SAHA.

Note: The Chiefs and the Wesleys played in a Saskatoon city league along with the University of Saskatchewan Huskies and the intermediate Saskatoon Purity Cubs. The Chiefs finished first with 6 wins and no losses while the Wesleys ended up second with 3 wins and 3 losses. This league did not count for the provincial playoffs. 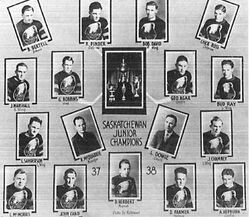 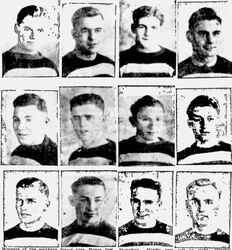 Moose Jaw Canucks
Add a photo to this gallery

Final @ Saskatoon
Add a photo to this gallery

Retrieved from "https://icehockey.fandom.com/wiki/1937-38_SJHL_Season?oldid=432926"
Community content is available under CC-BY-SA unless otherwise noted.