This is the 1937-38 season of the Provincial Senior League, a senior league in Quebec:

The previous year's champions from St. Jerome refused to stay with the league, instead joining the Montreal Intermediate League.

The first American team to play in a Canadian senior league was the Boston Olympics who joined the Provincial League.

Lafontaine and St Jacques, both from Montreal, had no home ice so played all their games on the road.

Only Sherbrooke and Boston had artificial ice.

Drummondville, Granby, Sherbrooke, and Valleyfield got 3 points for their first games against Lafontaine and St Jacques and 2 points for the rest.

All other games were worth 2 points each.

Boston Olympics lost a victory due to an ineligible player. In protest they withdrew. 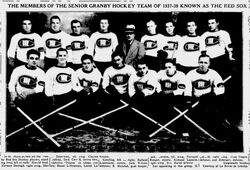 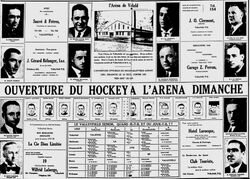 Valleyfield Braves
Add a photo to this gallery

Retrieved from "https://icehockey.fandom.com/wiki/1937-38_PSHL?oldid=608921"
Community content is available under CC-BY-SA unless otherwise noted.