The 1937–38 New York Rangers season was the 12th season for the team in the National Hockey League (NHL). New York finished 2nd in the American Division in regular season with a record of 27–15–6, and qualified for the playoffs. In the Semi-finals, the Rangers lost to the New York Americans 2–1 in a best of three games series.

The Rangers and the New York Americans played a seven game series in western Canada:

An important match versus the Boston Bruins on December 28, 1937 was judged to be the "poorest refereed game seen here in many a moon" [1] and as so often happens, when the referees (Clarence Campbell and Archie McTier) wouldn't keep order, the players took matters into their own hands. The spark that lit the fire occurred at the 12 minute mark of the first period with the Bruins leading 1-0 on Cooney Weiland's seventh goal of the season. As Milt Schmidt was carrying the puck out of the Bruins end, Mac Colville caught him with an elbow to the jaw, breaking it. Schmidt left the game and no penalty was called. As play progressed, every scrum saw high-sticking and threats. In the second period with Boston leading 2-0, anger turned to outrage when Dit Clapper was assessed a weak interference penalty. The Rangers knotted the game on the power play and shortly after, Phil Watson and Eddie Shore crashed into each other. Watson butt-ended Shore in the mouth and received a blow from Shore's stick to his forehead, felling him. Both players received major penalties and cooler heads prevailed for the rest of the game. Flash Hollett scored the winner on a weak, one-handed shot as he was holding off Ott Heller and the Bruins won 3-2.

The February 17, 1938 Bruins-Rangers game in New York went to overtime (which was not sudden death) tied 1-1 on goals by Milt Schmidt and Mac Colville. Tiny Thompson saved the game for Boston just before the third frame ended with a diving save off Bryan Hextall. After the Bruins Gord Pettinger scored at the 3:59 mark, Milt Schmidt took a pass from Flash Hollett, cut to the right of the Rangers net and beat Dave Kerr with a beautiful backhand goal to the top left corner tipped by Dit Clapper (a video exists of this). Hextall scored with 19 seconds left but the Bruins held on for a 3-2 win and a five point lead for first place.

Determined to not lose any more ground, the Rangers came out blazing against the Bruins on February 20, 1938 and scored twice in the first period. Near the end of the frame, Eddie Shore nailed Babe Pratt with a check and the two went at it. Having not settled matters, the two fought in the penalty box which required police intervention. Charlie Sands scored through a screen in the second period and Dit Clapper tied the game 5:02 into the third period. With 1:11 left in regulation, Leroy Goldsworthy whacked in a rebound for a 3-2 Boston win. It was the first time all season the Rangers blew a two goal lead.

In New York, the Bruins met the Rangers on March 13, 1938 and the Blue Shirts Alex Shibicky opened the scoring, or did he? His shot hit the net, bounced out to the blueline, Shibicky raised his stick in triumph and the goal light went on. Several New York Americans players were in the stands and informed the Bruins the puck hit the crossbar.[2] The Bruins protested but referee Clarence Campbell counted it. In the third period, Charlie Sands tied it up and in the last minute, there was a faceoff in Boston's zone. Bill Cowley won it, kicked the puck to Woody Dumart who used Sands as a decoy on a 2 on 1, and fired it in. Mistakenly, no assist was given on the game winner. The Bruins had won their 7th Prince of Wales Trophy.

Game 3 was decided in the 4th overtime period as Lorne Carr scored the series winning goal. 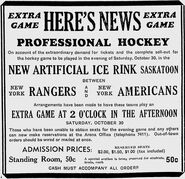 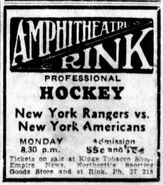 Leroy Goldsworthy is stopped by Dave Kerr, February 17, 1938.
Add a photo to this gallery

A minute worth of footage from the February 17, 1938 game won 3-2 by the Bruins over the New York Rangers. Fascinating footage including the Kraut Line in action, Milt Schmidt getting into a scrap, Eddie Shore with an open ice hit and a goal by Dit Clapper, assisted by Schmidt on the Rangers Dave Kerr which would win the game 3-2 in overtime.

Action from Game 1 of the 1938 Quarter-finals Rangers-Americans game on March 22, 1938. Two different views of a goal by Jack Beattie which tied the game in the second period are shown. The Americans won 2-1 in double overtime on a goal by John Sorrell.

The New York Americans win an ice hockey match against the New York Rangers by 2-...HD Stock Footage
Add a photo to this gallery

Retrieved from "https://icehockey.fandom.com/wiki/1937–38_New_York_Rangers_season?oldid=730365"
Community content is available under CC-BY-SA unless otherwise noted.