The 1937–38 NHL season was the 21st season of the National Hockey League (NHL). Eight teams each played 48 games. The Chicago Black Hawks were the Stanley Cup winners as they beat the Toronto Maple Leafs three games to one in the final series.

Bill Dwyer could not come up with the capital required to retain his team and the NHL took full control of the New York Americans.

In September 1937, the NHL passed the 'icing' rule whereby teams could no longer shoot the puck the length of the ice to delay the game. Teams were allowed to continue to 'ice' the puck during penalties. The penalty shot was amended to remove the dots where the shot was to take place. Two new lines 30 feet from the goal were added instead. A player taking a penalty shot would start from the line closest to his own goal, skate with the puck and shoot before he crossed the penalty line nearest the opposition goal. After a puck was shot out-of-bounds, the location of the following faceoff was now to occur at the point where the shot was made, instead of where it exited the rink as was done until that time.

The Howie Morenz Memorial Game, the NHL's second All-Star game, was played November 2, 1937 and raised over $11,447, which, added to other contributions, established a fund of over $20,000 for the Morenz family. Prior to the start of the game, Howie Morenz's uniform and playing kit was auctioned and Joseph Cattarinich put down the winning bid of $500. The uniform was presented to Howie Morenz Jr. The NHL All-Stars defeated a combined team of Canadiens and Maroons players 6–5.

Charlie Conacher was named captain of the Toronto Maple Leafs, and he had a big weekend at the expense of Chicago November 13 with a hat trick in a 7–3 win. He then scored 2 goals in a 3–3 tie. However, The Big Bomber ran into misfortune once more on November 18th in Montreal against the Canadiens when he dislocated his shoulder. The cycle of injuries had a cumulative effect on Conacher's nervous and physical condition and his doctor told him to retire from hockey. He did retire for the rest of the season, but would play again the next season, but was forever gone from the Leafs.

The New York Rangers lost their star center Neil Colville for a few games as the result of some horseplay that must have infuriated Lester Patrick. Defenceman Joe Cooper was pursuing a fad of slicing off neckties from teammates using a penknife. Colville threw up his hand only to receive a gash that required 11 stitches to close.

The Bruins had the best goals against in the league lead by Eddie Shore and goalie Tiny Thompson who won their fourth Hart Memorial Trophy and Vezina Trophy respectively. Both were also First Team All-Stars. Shore was ably teamed with Jack Portland while Flash Hollett was paired with rookie Jack Crawford. Crawford would become a defensive stalwart for the Bruins for the next dozen years, easily identified by the helmet he wore.

The Kraut Line made its debut in the season opener against the Montreal Maroons and had an immediate impact. Milt Schmidt scored, assisted by Woody Dumart in a 4-2 win. The Bruins went on a tear and went undefeated in November 1937.

Milt Schmidt broke his jaw during the December 28, 1937 match versus the New York Rangers. He returned to action two games later wearing a jaw protector.

The New York Americans, with Ching Johnson and Hap Day to relieve Joe Jerwa and Al Murray on defence, were doing much better than usual. Earl Robertson, their new goaltender, was leading the Canadian Division in goaltending and ended up doing so at season's end. The Amerks also had Sweeney Schriner and Nels Stewart contributing in a nice way to the offence.

The Montreal Maroons, coached at first by King Clancy, settled into last place and president and general manager Tommy Gorman decided he'd take over as coach. He did even worse and the fans stayed away. Although the team did badly, one highlight was an 11–7 win over their rivals, the Canadiens, and Baldy Northcott had a hat trick in the game. There seemed to be nothing Gorman could do to revitalize the team and at one stretch the team lost 8 straight games. On March 17, 1938, the Maroons played their last game against their rivals, the Canadiens. The Maroons Russ Blinco became the first player to wear glasses during an NHL game in the 1937-38 season. [1]

Detroit was the shockingly bad team of the American Division. After winning the Stanley Cup in 1937, they declined into the cellar of the Division. They had one bright moment when Carl Liscombe set a record for the fastest hat trick to this time (since broken by Bill Mosienko). Liscombe scored three goals in 1 minute and 52 seconds in a 5–1 win over Chicago.

The Cinderella story of the century was the Chicago Black Hawks, who would barely made the playoffs, but proceeded to defeat the Canadiens, the Americans and the Maple Leafs to win the Cup with the record lowest regular-season winning percentage in the NHL.

The New York Americans stunned the New York Rangers as Lorne Carr scored the winner in overtime in the third and deciding game.

The Canadiens beat the Hawks in game one of the Quarter-finals, as Toe Blake had a hat trick. But Mike Karakas shut out the Canadiens in the second game and even though Georges Mantha appeared to win the game with a freak goal in game three, Earl Seibert kept the Hawks from losing with a goal late in the game, and then the Hawks won the series in overtime.

The Maple Leafs and Bruins met for the fourth time in playoffs in the 1930's. The Leafs won the three previous series but the Bruins were heavy favorites, having won the season series convincingly. Turk Broda and Tiny Thompson played every minute in goal. Toronto effectively checked the Kraut Line, keeping them off the scoresheet in the series.

Game 1 at Maple Leaf Gardens was a close checking, rough affair and scoreless through regulation. The Bruins killed off a penalty to Ray Getliffe in the first overtime period. In the second OT, in front of Toronto's net, Milt Schmidt missed a pass which sprang Nick Metz and rookie George Parsons on a 2 on 1. Metz's pass to Parsons was perfect and he fired a shot over Thompson's pad at 1:31 for the game winner.

Game 2 at Toronto had the Bruins vowing to not match the Leafs defensive style and to forecheck more. Good to their word, the Bruins pressed hard and 70% of the game was spent in Toronto's zone.[2] After a scoreless first period, the turning point came when league scoring champion Gordie Drillon, who was being effectively shadowed by Ray Getliffe, kicked Getliffe in the skate, cutting his foot deeply and knocking him out of the game. The Leafs went in front 1-0 on a second period goal by "Pep" Kelly until Charlie Sands tied it up at 7:37 of the third period. Ex-Leaf Art Jackson was assigned to cover Drillon but wasn't up to the task as Drillon scored and the Leafs won 2-1. The Leafs Conn Smythe acknowledged his club was lucky to come out ahead, praised the many rushes made by Eddie Shore and indicated the Bruins lack of finishing off chances was their downfall. Smythe had attendants at each corner of the rink with sticks, so if a Leaf broke his, he wouldn't have to skate back to the bench for a replacement.[3]

Game 3 at Boston Garden saw several line-up changes. Ray Getliffe played but Mel Hill was recalled from the minors and spelled him off. Robert "Red" Hamill and Frank Brimsek were also recalled but not used. Toronto was without Busher Jackson who suffered torn hand ligaments. In a repeat of Game 2, the Bruins held a wide edge in chances while the Leafs played defensive hockey and waited for breaks. Drillon opened the scoring in the second period before Bill Cowley (playing with a broken nose) tied it up early in the third. Pep Kelly and Cowley traded goals and late in the period, Jack Portland, who'd played an outstanding defensive game for the Bruins, missed an open net. Drillon scored on a 50 foot screen shot at 10:04 of the first OT to win the series for the Leafs. Hockey columnists noted that the underdogs won every series.

In the Series B Semi-Finals, it was Chicago and the New York Americans, who beat Chicago in game one 3–1. Game two was a great goaltenders battle between Mike Karakas and Earl Robertson. It appeared that the Americans were headed to their first Stanley Cup final when Nels Stewart scored with seconds left in the game, but referee Clarence Campbell disallowed the goal, saying Eddie Wiseman was in the goal crease. Cully Dahlstrom scored the goal that saved the Black Hawks. In New York, the deciding game saw Alex Levinsky of Chicago score the go-ahead goal, but the red light didn't go on. Investigation revealed that fans were holding the goal judge's hand so he could not signal the goal. Although the Amerks came close, they were unable to tie the score and the Black Hawks were in the Finals.

The following is a list of players of note who played their first NHL game in 1937–38 (listed with their first team, asterisk(*) marks debut in playoffs):

The following is a list of players of note that played their last game in the NHL in 1937–38 (listed with their last team):

The NHL All-Stars at the Howie Morenz Memorial Game, November 2, 1937. 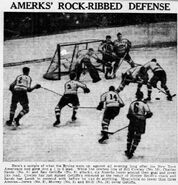 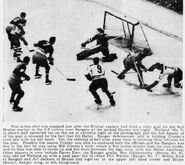 Tiny Thompson and Mel Hill against the Rangers, March 13, 1938.
Add a photo to this gallery

A minute worth of footage from the February 17, 1938 game won 3-2 by the Bruins over the New York Rangers. Fascinating footage including the Kraut Line in action, Milt Schmidt getting into a scrap, Eddie Shore with an open ice hit and a goal by Dit Clapper, assisted by Schmidt on the Rangers Dave Kerr which would win the game 3-2 in overtime.

Retrieved from "https://icehockey.fandom.com/wiki/1937–38_NHL_season?oldid=730597"
Community content is available under CC-BY-SA unless otherwise noted.