The 1937–38 Montreal Maroons season was the 14th and last season of the Montreal Maroons. The Maroons finished last in the Canadian Division and did not qualify for the playoffs. Several players were transferred to the Canadiens and the franchise was suspended after the season. The possibility of selling the franchise to St. Louis, Missouri interests was explored, but the National Hockey League (NHL) vetoed the idea.

The Maroons, coached at first by King Clancy, settled into last place and president so general manager Tommy Gorman decided he'd take over as coach. He did even worse and the fans stayed away. Although the team did badly, one highlight was an 11-7 win over their rivals, the Canadiens, and Baldy Northcott had a hat trick in the game. There seemed to be nothing Gorman could do to revitalize the team and at one stretch they lost 8 straight games. During the March 5, 1938 game against the Toronto Maple Leafs, Paul Runge was fined $50 and suspended for two days for hitting Red Horner over the head with his stick.[1]

On March 17, 1938, the Maroons played their last game ever, against their rivals, the Canadiens. Russ Blinco became the first player to wear glasses during an NHL game. [2] 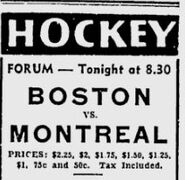 Last game
Add a photo to this gallery

Retrieved from "https://icehockey.fandom.com/wiki/1937–38_Montreal_Maroons_season?oldid=730400"
Community content is available under CC-BY-SA unless otherwise noted.