They were played in Garmisch-Partenkirchen, Germany.

At the 1936 Winter Olympics, Great Britain won the men's ice hockey competition. Eleven of the thirteen British players had trained and played previously in Canada sometime during their career. It is a common misconception that the British team was made up of Canadians. Only one player was actually born in Canada.

Top two teams in each group advanced to semifinals

Top two teams in each group advanced to Medal Round. 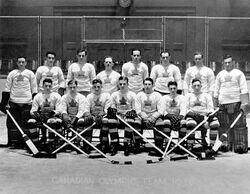 United States
Add a photo to this gallery

Retrieved from "https://icehockey.fandom.com/wiki/1936_Olympics?oldid=643921"
Community content is available under CC-BY-SA unless otherwise noted.