Note: The Eastern Hockey League was suspended by the AAU. The Baltimore Orioles were suspended for alleged professionalism (importing Canadians) and the rest of the league stood by them. 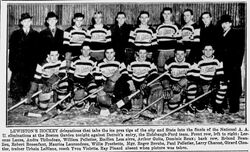 Lewiston St. Doms
Add a photo to this gallery

Retrieved from "https://icehockey.fandom.com/wiki/1936-37_United_States_National_Senior_Championship?oldid=585904"
Community content is available under CC-BY-SA unless otherwise noted.