This is the 1936-37 season of the Ontario Hockey Association's Senior A and Senior B series, both of which competed for the Allan Cup:

The Toronto and York (TANDY) Mercantile League was the only Senior A league in Ontario. It was made up of three Toronto and one Oshawa teams, all sponsored by companies.

The Port Colborne Sailors had been a Senior A team for the past three seasons. They were turned down by the TANDY league. primarily because of travel expenses.

The Port Colborne Sailors, turned down by the TANDY league, were classified as the only Senior B team in the province. They played exhibition games during the season.

They the played the 1936-37 OHA Intermediate A Playoffs champion.

Senior B - Intermediate A PlayoffEdit

Toronto Dominions
Add a photo to this gallery 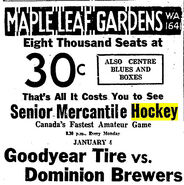 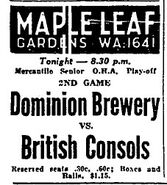 Senior A Final @ Toronto
Add a photo to this gallery

Retrieved from "https://icehockey.fandom.com/wiki/1936-37_OHA_Senior_Season?oldid=464001"
Community content is available under CC-BY-SA unless otherwise noted.