The 1936–37 New York Rangers season was the 11th season for the team in the National Hockey League. The Rangers finished 3rd in the American Division, with a 19–20–9 record. New York qualified for the Stanley Cup playoffs, where the team defeated the Toronto Maple Leafs and Montreal Maroons to reach the 1937 Stanley Cup Finals. In the Cup Finals, the Rangers lost to the Detroit Red Wings 3 games to 2.

On November 16, 1936, Hal Winkler made his NHL debut for the New York Rangers and gained a 1-0 shutout over the Montreal Maroons. He was the first goaltender to have a shutout in his NHL debut. [1] 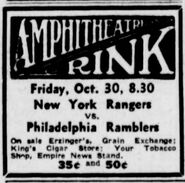 Leroy Goldsworthy's winner, February 16, 1937.
Add a photo to this gallery

Fascinating video of December 20, 1936 game between the Rangers and the Montreal Canadiens. After a goalless first period, goals by Joffre Desilets and Aurel Joliat put the Habs up 2-0 going into the third. One of two Lynn Patrick goals that tied the game up in the third period is shown. The game went into overtime which was not sudden death. The Rangers scored three times, with the final goal by Frank Boucher shown. Toe Blake added a consolation goal and the Rangers won 5-3 (OT).

Retrieved from "https://icehockey.fandom.com/wiki/1936–37_New_York_Rangers_season?oldid=728583"
Community content is available under CC-BY-SA unless otherwise noted.