The 1936–37 Montreal Maroons season was the 13th season of the Maroons franchise in the National Hockey League (NHL). The club finished 2nd in the Canadian Division and lost in the Semi-finals to the New York Rangers 2 games to 1.

The Maroons and the Boston Bruins played a pre-season series of six games in eastern Canada. Each team won three games.

The last playoff series win for the Montreal Maroons saw them defeat the Boston Bruins 2-1 in a best of three first round series. The Bruins were without all-star defenseman Eddie Shore who was sidelined with a cracked vertebrae as well as Bun Cook and Sylvio Mantha.

Game 1 at Montreal was dominated by the Maroons who went ahead 2-0 on goals by Carl Voss and Baldy Northcott before Jack Beattie cut the lead to 2-1. Late third period goals by Herb Cain and Bob Gracie sealed a 4-1 victory. Dit Clapper received a major penalty for fighting Dave Trottier after the latter butt-ended him in the head. After referee Clarence Campbell insulted Clapper, he punched Campbell.

Game 2 at Boston saw the Maroons without first-liner Dave Trottier, whose eye was swollen shut after his fight with Dit Clapper in Game 1. Clapper was fined $100 but not suspended for any games. Lionel Conacher took a minor penalty in the first period after a viscous cross-check in which he broke Leroy Goldsworthy's nose. Dit Clapper scored on the power play at 4:54 before Charlie Sands made it 2-0 at 15:42 after his blueline blast deflected in off Maroons defenseman Stewart Evans. In the second period, Conacher was awarded a penalty shot after Bruins goalie Tiny Thompson tripped him in a goalmouth melee. Thompson made a brilliant skate save to preserve his shutout which was the turning point in the game. Ray Getliffe scored soon after on a rebound of a Bill Cowley shot and Goldsworthy returned to action with plaster over his nose. In the third period, captain Red Beattie beat goalie Bill Beveridge with a slapshot as the Bruins won 4-0 and tied the series.

Game 3 at Boston saw Bobby Bauer play his first post season match. The first period was scoreless in which Tiny Thompson's hand was cut in a goalmouth scramble. The game was delayed for 12 minutes while Thompson received stitches. In the second period, the Bruins took a 1-0 lead on a goal by Dit Clapper. After Thompson made a save, he accidentally batted the puck into his own net at 15:49. Rattled, he misplayed a Russ Blinco shot, making it 2-1 for the Maroons. The Maroons added two more in the last frame to take the series 2 games to 1. They'd lose their second round series to the New York Rangers. 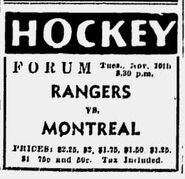 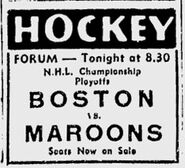 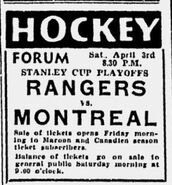 Retrieved from "https://icehockey.fandom.com/wiki/1936–37_Montreal_Maroons_season?oldid=728667"
Community content is available under CC-BY-SA unless otherwise noted.