The 1936–37 Montreal Canadiens season was the team's 28th season of play. The Canadiens finished 1st in the Canadian Division and lost in the Semi-finals to the Detroit Red Wings 3 games to 1.

The Montreal Canadiens had hit the bottom in 1935–36, and Babe Siebert was obtained to shore up the defence. Cecil Hart was rehired as coach. Hart placed a condition on his returning to the club, that former star Howie Morenz would return to the club. After being traded to Chicago and from there to New York, Morenz had struggled and the Rangers were willing trade partners for Morenz. Goalie George Hainsworth also returned to the Canadiens, signed as a free agent.

The Canadiens went from last to first in the Canadian Division. Morenz was just hitting his stride in January 1937, when tragedy struck. On one of his hurtling rushes, he was being checked by Earl Seibert of Chicago when his left skate got caught in the dasher of the end boards, and Morenz suffered a badly fractured leg. After suffering a nervous breakdown worrying about if he'd be able to come back, more bad luck occurred. On March 8, 1937, X-rays revealed that Howie had blood clots in his healing leg. An operation was scheduled for the next day, but when Howie ate a light supper and told the nurse he wanted to rest, in falling asleep his pallor suddenly changed and the nurse knew something was wrong. A blood clot had stopped his heart, and attempts to revive Howie failed. News of Morenz's death shocked the hockey world, and thousands filed past his bier, many in tears, to pay their last respects.

As champions of the Canadian division, the Canadiens proceeded directly to the Semi-finals against the Detroit Red Wings. Montreal lost the best-of-five series 3–1. 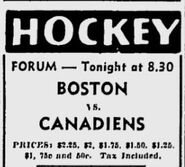 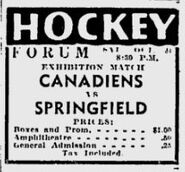 Fascinating video of December 20, 1936 game between the Rangers and the Montreal Canadiens. After a goalless first period, goals by Joffre Desilets and Aurel Joliat put the Habs up 2-0 going into the third. One of two Lynn Patrick goals that tied the game up in the third period is shown. The game went into overtime which was not sudden death. The Rangers scored three times, with the final goal by Frank Boucher shown. Toe Blake added a consolation goal and the Rangers won 5-3 (OT).