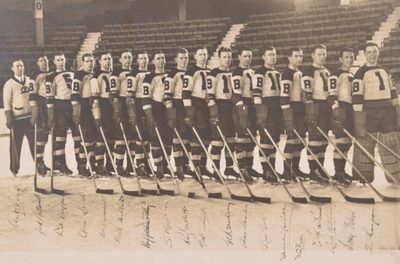 The 1936–37 Boston Bruins season was the Bruins' 13th season in the NHL. The Bruins finished 2nd in the American Division and lost in the Quarter-finals to the Montreal Maroons, 2 games to 1.

The Bruins and the Montreal Maroons played a pre-season series of six games in eastern Canada. Each team won three games.

The season saw an improvement in the Bruin's scoring, led by Bill Cowley who would become a perennial scorer for the Bruins for the next decade. Scoring was balanced throughout the line-up but the loss of Eddie Shore (who cracked a vertebrae crashing into the boards January 28, 1937) for over half the season challenged the Bruins defensively, resulting in a second place finish in the American Division.

Three players who'd be the core of the Bruins offense for over a decade and lead them to two Stanley Cups were in the line-up this season. Milt Schmidt and Woody Dumart were in and out of the roster but started playing on the same line in February 1937 and clicked. Bobby Bauer played his first NHL game during the Bruins last regular season game and promptly scored. The pieces were in place for the Kraut Line.

The last playoff series win for the Montreal Maroons saw them defeat the Bruins 2-1 in a best of three first round series. The Bruins were without all-star defenseman Eddie Shore who was sidelined with a cracked vertebrae.

Game 1 at Montreal was dominated by the Maroons who went ahead 2-0 on goals by Carl Voss and Baldy Northcott before Jack Beattie cut the lead to 2-1. Late third period goals by Herb Cain and Bob Gracie sealed a 4-1 victory. Dit Clapper received a major penalty for punching referees Dave Trottier and Clarence Campbell. He was also fined $100 but not suspended for any games.

Game 2 at Boston saw the Maroons Lionel Conacher take a minor penalty in the first period after a collision with the Bruins Leroy Goldsworthy in which he broke Goldsworthy's nose. Dit Clapper scored on the Power play at 4:54. A brilliant performance by Tiny Thompson who posted a shutout and a pair of goals by Ray Getliffe in addition to a tally by Charlie Sands lead the Bruins to a 4-0 win and tied the series.

Game 3 at Boston saw the Bruins took a 1-0 lead on a goal by Dit Clapper. The Maroons scored four straight to take the series 2-1. The Maroons would lose their second round series to the New York Rangers.

Retrieved from "https://icehockey.fandom.com/wiki/1936–37_Boston_Bruins_season?oldid=706208"
Community content is available under CC-BY-SA unless otherwise noted.