The 1935 Stanley Cup Final championship series was contested by the Montreal Maroons and the Toronto Maple Leafs. The Maroons would win the series 3–0 to win their second and final Stanley Cup.

Toronto defeated the Boston Bruins in a best-of-five 3–1 to advance to the Final. The Maroons had to play a total-goals series; 1–0 against Chicago Black Hawks, and win a second two game total-goals series 5–4 against the New York Rangers.

This was the first all-Canadian Final since the Maroons defeated the Victoria Cougars in the 1926 Stanley Cup Finals. Maroons goaltender Alex Connell allowed just four goals in the three games. Dave Trottier was the overtime hero in Game 1 while Baldy Northcott scored the Cup winning goal and led all playoff scorers with 5 points.

Maroons manager-coach Tommy Gorman became the only coach to win successive Stanley Cup titles with two different teams after winning with the Chicago Black Hawks in the 1934 Final. 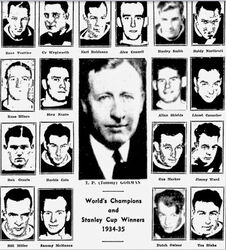 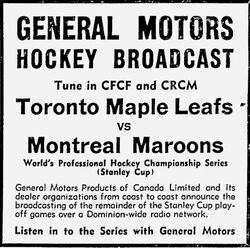