This is the 1935-36 season of the Ontario Hockey Association's Senior series:

The Galt Terriers withdrew prior to the start of the season due to the lack of qualified players. Instead they entered a team in the 1935-36 OHA Intermediate A Groups. 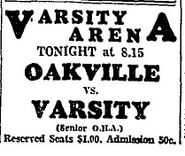 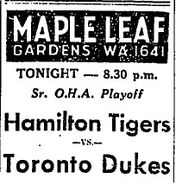 Group 1 Final @ Toronto
Add a photo to this gallery

Retrieved from "https://icehockey.fandom.com/wiki/1935-36_OHA_Senior_Season?oldid=438535"
Community content is available under CC-BY-SA unless otherwise noted.