The 1935–36 Toronto Maple Leafs season was Toronto's 19th season in the NHL. The Maple Leafs finished 2nd in the Canadian Division and lost in the 1936 Stanley Cup Finals to the Detroit Red Wings 3 games to 1.

Game 2 saw a confident Bruins team have their hopes dashed by six goal second period by the Leafs. The Bruins jumped out to an early 1-0 lead on a goal by Bill Cowley. The second period degenerated into a wild affair in which 40 minutes in penalties were called and Shore given a game misconduct. The Leafs capitalized with three power play goals. Without Shore and powered by a hat trick by Charlie Conacher and two goals by Buzz Boll, the Leafs managed a 8-3 win and won the series on by total goals, 8-6. 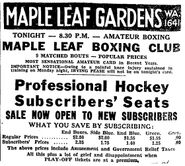 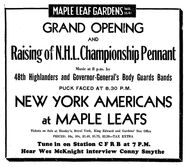 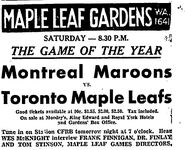 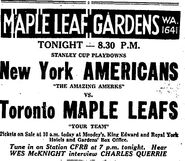 Retrieved from "https://icehockey.fandom.com/wiki/1935–36_Toronto_Maple_Leafs_season?oldid=728488"
Community content is available under CC-BY-SA unless otherwise noted.