In one of the most evenly matched series, the first game of the Maroons-Red Wings series set a record for the longest game in Stanley Cup playoff history. The game began at 8:30 p.m. at the Forum in Montreal, and ended at 2:25 a.m. The game was scoreless until in the sixth overtime, when Mud Bruneteau scored on Maroon goaltender Lorne Chabot to win the game. Normie Smith shut out the Maroons in the next game, and the Red Wings then beat the Maroons to win the series. 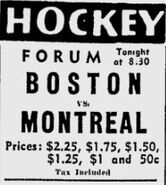 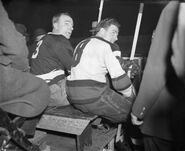 Maroons Lionel Conacher and Bruins Roger Jenkins sit together in the penalty "box" during the Bruins 2-0 win, December 10, 1935.
Add a photo to this gallery

Retrieved from "https://icehockey.fandom.com/wiki/1935%E2%80%9336_Montreal_Maroons_season?oldid=687097"
Community content is available under CC-BY-SA unless otherwise noted.