This is the 1934-35 season of the Ontario Hockey Association's senior series:

Note: An unbalanced schedule was played because of a shortage of ice time in Toronto. Besides the Toronto Maple Leafs there were also junior teams in the city competing for dates.

Note: The University of Toronto defaulted one game each to Port Colborne and Oakville.

Toronto All Stars beat Hamilton Tigers 2 games to none (2 ties did not count).

Note: Western Mustangs's games were worth 4 points each.

Kitchener, as the first place team, had the option of taking the bye or playing the semi final against the third place team. It chose to play because of the revenue of the playoff games. Hamilton got the bye to the final.

Note: All teams also played in the Michigan-Ontario League. 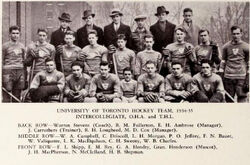 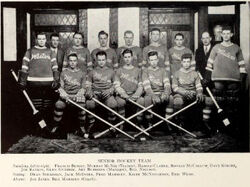 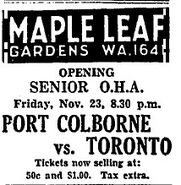 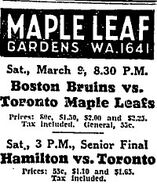 Senior A Final @ Toronto
Add a photo to this gallery

Retrieved from "https://icehockey.fandom.com/wiki/1934-35_OHA_Senior_Season?oldid=464435"
Community content is available under CC-BY-SA unless otherwise noted.