Ice Hockey Wiki
Register
Don't have an account?
Sign In
Advertisement
in: National Hockey League seasons, 1934 in hockey, 1935 in hockey

The 1934-35 NHL season was the 18th season of the National Hockey League. Nine teams each played 48 games. The Montreal Maroons were the Stanley Cup winners as they swept the Toronto Maple Leafs in three games in the final series.

With financial difficulties continuing for the Senators, the franchise was transferred to St. Louis changing the nickname to St. Louis Eagles. The team was not profitable in St. Louis, either, partly due to the extended travel of being located in the Canadian Division. The Eagles would sell players Syd Howe and Ralph "Scotty" Bowman to Detroit for $50,000 to make ends meet.

Montreal Canadiens owners Leo Dandurand and Joseph Cattarinich would sell the team to Ernest Savard and Maurice Forget of the Canadian Arena Company.

Penalty shots were introduced this season. Armand Mondou of the Montreal Canadiens took the first one on November 10, 1934 against George Hainsworth of the Toronto Maple Leafs, resulting in a save by Hainsworth.

The St. Louis Eagles opened the NHL season at home, in the segregated seating of the St. Louis Arena, against the Chicago Black Hawks on November 8, 1934. Howie Morenz made his debut for Chicago during the game and assisted on the game's first goal, by Johnny Gottselig. Earl Roche scored the Eagles first goal, assisted by Ralph "Scotty" Bowman but the Black Hawks triumphed 3-1.

Charlie Conacher decided to play coy this year and Conn Smythe had trouble signing him. With Harvey Jackson out, it looked as though only Joe Primeau would be the only member of the Kid line in action for Toronto. However, he did finally sign. Conacher responded with his best season, scoring 36 goals and leading the league in scoring.

A bombshell trade was made with Howie Morenz, Lorne Chabot, and Marty Burke going to Chicago for Leroy Goldsworthy, Roger Jenkins, and Lionel Conacher. The Canadiens then traded Lionel Conacher and Herb Cain to the Maroons for Nels Crutchfield. The trades did not help and the Canadiens lost some fans.

Meanwhile, Tommy Gorman bought a share of the Montreal Maroons from James Strachan and when he picked up Alex Connell, he had another winner. Although Morenz wasn't his old self, he did help Chicago, who finished second in the American Division, just falling short of Boston by only one point.

During the third period of the December 11, 1934 match between the Maroons and the Boston Bruins, Nels Stewart and Lloyd Klein were given match penalties for a stick-swinging fight. Boston's Stewart received a 1 game suspension while Klein got 3 games.

The playoffs continued to elude the New York Americans, but they added two important additions, left wing Dave "Sweeney" Schriner and right wing Lorne Carr. Teamed with centre Art Chapman, the Americans were on the way up.

The most pulsating series was that of Chicago Black Hawks and the Montreal Maroons. Chicago coach Clem Loughlin said that the team who won the series very likely would win the Stanley Cup. Neither team scored after two regulation games. In the overtime, Dave Trottier was cut and retired for stitches. He'd hardly arrived in the dressing room when Baldy Northcott scored the goal that won the series for the Maroons.

In the first round the New York Rangers met the Montreal Canadiens, who had placed third in the Canadian Division. The Rangers won the two-games total-goals series 6-5 (2-1, 4-4).

Game 1 of the Quarter-finals at Madison Square Garden on March 24, 1935, is remembered for its high level of physicality. In one sequence, an injured Earl Seibert of the Rangers was carried off the ice. Later, the Canadiens' Nels Crutchfield swung his stick into the head of Rangers captain Bill Cook. As a result, Cook collapsed to the ice and a bench-clearing brawl ensued which police had to end. Crutchfield was given a match penalty with no substitution. The Canadiens played for thirteen minutes one man short and two minutes with two men short. Bill Cook returned wearing a helmet over his bandages to score the second Rangers goal.

In Game 2, the Canadiens were down 4–1 in the game and tied it with three straight goals in the third. The Canadiens could not get another goal to tie the series.

In a repeat of two years before, the league's two best teams met in the second round of the playoffs, both teams having received byes in the first round. Although two games went into overtime, the Leafs had an easier time beating the Bruins than in the 1933 playoffs and held them to just two goals in the series.

Game 1 was a close checking affair with the only goal scored by Dit Clapper at 13:26 of the second OT period giving the Bruins their only win of the series and Tiny Thompson the shutout.

Game 2 was scoreless until goals from Charlie Conacher and Busher Jackson in the third period carried the Leafs to a 2-0 victory and tied the series 1-1.

Game 3 saw the Leafs score goals in each period on goals by Bill Thoms, Nick Metz and Busher Jackson to lead the Leafs to a 3-0 win. George Hainsworth posted his second shutout of the series.

Game 4 saw the Bruins lead for the first time in the series on a first period goal by Jack Beattie. With a little over two minutes left in the game, the Leafs Baldy Cotton scored with the Bruins Babe Siebert in the box, but the goal was disallowed as Cotton was in the crease. Arguments ensued and a bench-clearing brawl broke out with Siebert leaving the penalty box to join in. When order was restored, the Leafs had a 4 on 3 Power play and at 18:11, "Pep" Kelly tied it up. Kelly then took a late penalty and overtime started with the teams playing 3 men aside. In overtime, once Kelly's penalty was served, he jumped out of the box, retrieved the puck behind the Bruins next, wheeled out front and scored at 1:36 to win the series for the Leafs. The Leafs would lose the Stanley Cup Finals to the Montreal Maroons.

This was the first all-Canadian Final since the Maroons defeated the Victoria Cougars in the 1926 Stanley Cup Finals. Maroons goaltender Alex Connell allowed just four goals in the three games. Dave Trottier was the overtime hero in Game 1 while Baldy Northcott scored the Cup winning goal and led all playoff scorers with 5 points.

Maroons manager-coach Tommy Gorman became the only coach to win successive Stanley Cup titles with two different teams after winning with the Chicago Black Hawks in the 1934 Final.

The following is a list of players of note who played their first NHL game in 1934-35 (listed with their first team, asterisk(*) marks debut in playoffs):

The following is a list of players of note that played their last game in the NHL in 1934-35 (listed with their last team): 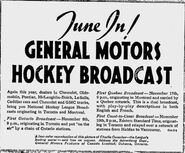