This is the 1934-35 season of the Maritime Senior Hockey League.

This season, the league started out as a mercantile league - professional in other words. The teams raided other teams, mostly in Ontario and Quebec, for players.

In late December, the Canadian Amateur Hockey Association (CAHA) stepped in hard. It threatened to suspend all the players and the four teams unless the strict amateur rules were followed.

The St John Beavers had seven ineligible players out of a roster of eleven and stood firm. The other teams had fewer so they caved in to the CAHA. St John stayed out and tried to form a New Brunswick Mercantile League. They formed another team in Saint John from players from the other teams that were ineligible to play in the senior league.

The other three teams formed a brand new league in January.

These are the final standings of the Maritimes Mercantile Hockey League:

The Halifax Wolverines changed their name on Nov. 28. British Consols was the name of a popular cigarette of the time.

Back to the Maritime Senior League

On Jan. 7,1935 the new league started play with three teams. On Jan 17 the Moncton Hawks withdrew to join the St John Beavers in the mercantile league. They did agree to play a game in Charlottetown the next day before leaving for good.

The league with the Beavers was unsuccessful and the Hawks folded on Feb 4.

These are the final standings of the Maritime Senior Hockey League:

With only two teams left, Charlottetown and Halifax played the league final.

The Halifax Wolverines went on to win the Allan Cup. But as expected they and Charlottetown and the league folded soon after.

By winning the Allan Cup the Wolverines qualified to represent Canada at the 1936 Olympics. Because the team had folded, the Port Arthur Bearcats took over the lead with some of the Wolverines players joining in. 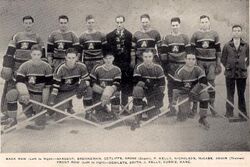 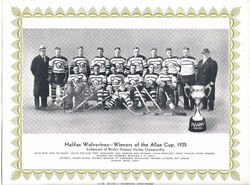