This was the 1934-35 season of the Montreal Senior Group:

For the first time there was a team from outside Montreal in the league. After the NHL's Ottawa Senators moved to St. Louis, a new senior team of the same name was formed.

McGill University and the Montreal Victorias played two four-point games against each other team. McGill's team also played in the 1934-35 CIAU Season.

The Group played 26 doubleheaders at the Montreal Forum and attracted 88,636 patrons, or an average of 3693 per event. This total was 17,813 over the previous season's total. 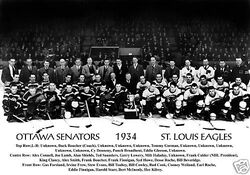 Note:The NHL's St. Louis Eagles, who had been the Ottawa Senators the year before, were still owned by Ottawa interests. The Eagles trained together with the new, senior Ottawa Senators. 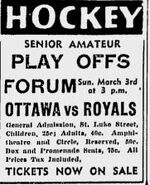 Retrieved from "https://icehockey.fandom.com/wiki/1934-35_MSG?oldid=608808"
Community content is available under CC-BY-SA unless otherwise noted.