This is the 1934-35 Manitoba Junior Hockey League Season.

Forword
The MJHL was run & controlled by the Manitoba Amateur Hockey Association.
Realistically, the League was actually two leagues under one umbrella.

MAHA cancels balance of season after Winnipeg Monarchs & Kenora Thistles clinched the only 2 playoff spots.
And an investigation into the eligiblity of Willie Troniak of the Kenora Thistles was concluded.

Contrary to expectations, "B" Division All-Stars triumphed over a select team from "A" Division, 6 to 2 on Wednesday night, March 13, at the Olympic Rink. Harvey Palmatier of the Elmwood Maple Leafs was the big gun, scoring three. 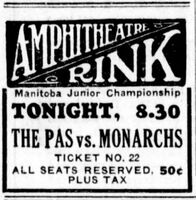 Provincial Final @ Winnipeg
Add a photo to this gallery
Retrieved from "https://icehockey.fandom.com/wiki/1934-35_MJHL_Season?oldid=591680"
Community content is available under CC-BY-SA unless otherwise noted.