The 1934–35 Toronto Maple Leafs season was Toronto's eighteenth season in the NHL. The Maple Leafs finished first in the Canadian Division and lost in the 1935 Stanley Cup Finals to the Montreal Maroons, three games to none.

The Leafs held their training camp in Galt, Ontario.

In a repeat of two years before, the league's two best teams met in the second round of the playoffs, both teams having received byes in the first round. Although two games went into overtime, the Leafs had an easier time beating the Bruins than in the 1933 playoffs and held them to just two goals in the series.

Game 1 was a close checking affair with the only goal scored by Dit Clapper at 13:26 of the second OT period giving the Bruins their only win of the series and Tiny Thompson the shutout.

Game 2 was scoreless until goals from Charlie Conacher and Busher Jackson in the third period carried the Leafs to a 2-0 victory and tied the series 1-1.

Game 3 saw the Leafs score goals in each period on goals by Bill Thoms, Nick Metz and Busher Jackson to lead the Leafs to a 3-0 win. George Hainsworth posted his second shutout of the series.

Game 4 saw the Bruins lead for the first time in the series on a first period goal by Jack Beattie. With a little over two minutes left in the game, the Leafs Baldy Cotton scored with the Bruins Babe Siebert in the box, but the goal was disallowed as Cotton was in the crease. Arguments ensued and a bench-clearing brawl broke out with Siebert leaving the penalty box to join in. When order was restored, the Leafs had a 4 on 3 Power play and at 18:11, "Pep" Kelly tied it up. Kelly then took a late penalty and overtime started with the teams playing 3 men aside. In overtime, once Kelly's penalty was served, he jumped out of the box, retrieved the puck behind the Bruins next, wheeled out front and scored at 1:36 to win the series for the Leafs. The Leafs would lose the Stanley Cup finals to the Montreal Maroons. 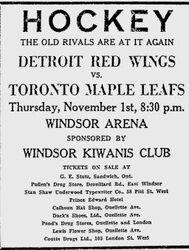 Pre-season @ Windsor
Add a photo to this gallery

Retrieved from "https://icehockey.fandom.com/wiki/1934–35_Toronto_Maple_Leafs_season?oldid=688790"
Community content is available under CC-BY-SA unless otherwise noted.