The 1934–35 Montreal Canadiens season was the team's 26th season of play. The Canadiens finished 3rd in the Canadian Division and lost in the Quarter-finals to the New York Rangers 6 goals to 5.

The Canadiens had their training camp in Saint John, New Brunswick.

They played a four game series vs. the Boston Bruins in eastern Canada:

A bombshell trade was made with Howie Morenz, Lorne Chabot, and Marty Burke going to Chicago for Leroy Goldsworthy, Roger Jenkins, and Lionel Conacher. The Canadiens then traded Lionel Conacher and Herb Cain to the Maroons for Nels Crutchfield.

In the first round the Canadiens met the New York Rangers, who had placed third in the American Division. The Canadiens lost the two-games total-goals series 5–6 (1–2, 4–4).

Game 1 of the Quarter-finals at Madison Square Garden on March 24, 1935, is remembered for its high level of physicality. In one sequence, an injured Earl Seibert of the Rangers was carried off the ice. Later, the Canadiens' Nels Crutchfield swung his stick into the head of Rangers captain Bill Cook. As a result, Cook collapsed to the ice and a bench-clearing brawl ensued which police had to end. Crutchfield was given a match penalty with no substitution. The Canadiens played for thirteen minutes one man short and two minutes with two men short. Bill Cook returned wearing a helmet over his bandages to score the second Rangers goal.

In Game 2, the Canadiens were down 4–1 in the game and tied it with three straight goals in the third. The Canadiens could not get another goal to tie the series. 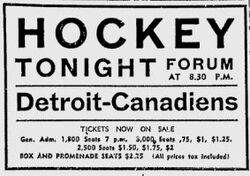 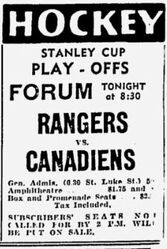