This is the 1933-34 season of the Saskatchewan Junior Hockey League:

There were four junior teams registered in the north and four in the south. Three of the southern teams formed a league with the winner meeting the fourth team for the southern championship. The four northern teams played off for the northern title.

The Regina Maple Leafs dropped out before the season started. The Regina Pats and the Moose Jaw Canucks scheduled a five game series to determine a winner.

The remaining games were cancelled since Regina had already clinched the series.

This league did not count for the provincial playoffs. 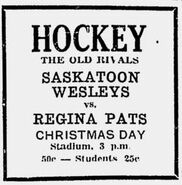