The 1933-34 NHL season was the 17th season of the National Hockey League. Nine teams each played 48 games. The Chicago Black Hawks were the Stanley Cup winners as they beat the Detroit Red Wings three games to one.

The Ottawa Senators, having enough problems, now had to deal with holdout Cooney Weiland. He was sold to Detroit, strengthening the Red Wings. The Senators continued to lose, but won a few games when they signed an amateur named Max Kaminsky to centre the Roche brothers Desse and Earl. A defenceman, Ralph "Scotty" Bowman, gave Ottawa fans a little to cheer about. But the handwriting was on the wall, and in the last game to be played in Ottawa for many years, the Senators let the New York Americans use goaltender Alex Connell when Roy Worters was hurt. He helped the Americans beat his club.

A major goaltender swap occurred as Lorne Chabot was traded to the Montreal Canadiens for George Hainsworth. The Canadiens also loaned Wilf Cude to Detroit and he led the Red Wings to first place. Chabot didn't do badly either, leading the Canadian Division in goaltending, helping the goal-strapped Canadiens to second place. Aurel Joliat of the Canadiens won the Hart Memorial Trophy.

The December 12, 1933 game versus the Toronto Maple Leafs was filled with violence. Just before the 13:00 mark of the second period, Eddie Shore was rushing the puck into the Leafs zone when he was checked by Red Horner into the boards, hitting his head. Horner retrieved the puck and rushed up the ice so Ace Bailey hung back to cover for Horner. Dazed and angry, Shore mistook Bailey for Horner and hit Bailey low from behind. Bailey fell backwards and his head hit the ice, fracturing it and sending him into convulsions. Red Horner then punched Shore who fell backwards, hitting his head on the ice, knocking him out. Both received game misconducts and Shore had to be carried off the ice by his teammates where 18 stitches were required to Shore's head. Bailey's life hung in the balance but he survived after two surgeries. The first all-star game was held on February 14, 1934 to benefit Bailey which Shore participated in. He apologized and Bailey forgave Shore. Shore was suspended for 16 games and wore a helmet for the rest of his career.

On February 14, 1934, the first NHL All-Star Game, albeit an unofficial one, was held to benefit Ace Bailey. The game itself was proposed by Walter Gilhooley, the sports editor of the Journal in Montreal. This proposal would become a reality on January 24, 1934, in a meeting of the NHL's Board of Governors in 1934.

The NHL's first All-Star Game was held at Maple Leaf Gardens in Toronto on February 14, 1934, during which Bailey's #6 uniform was retired by the Leafs. It was the first number to be retired in the NHL. The game saw the Leafs battle against an All-Star team made of players from the other seven teams, which the Leafs won 7-3. One of the more memorable moments before the game was when Bailey presented Shore with his All-Star jersey, showing to the public that Bailey had clearly forgiven him for his actions. Bailey also presented a trophy to NHL President Frank Calder before a game in the hope that the trophy would go to the winner of an annual All-Star Game for the benefit of injured players. 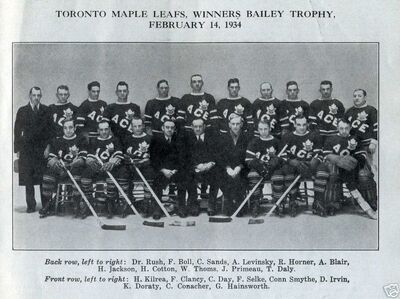 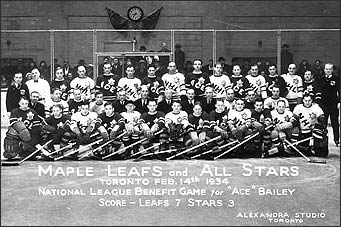 In a little-known postscript to this game, Herbie Lewis and Larry Aurie of the Red Wings and Normie Himes and Red Dutton of the Americans had a game in New York City the next day. They took a flight from Buffalo that left at 7:30 AM and arrived at Newark airport around noon. This marked the first time that NHL players flew to an NHL game.

The Chicago Black Hawks beat the Detroit Red Wings three games to one with the fourth game going into double overtime. After regulation time in the fourth game, Black Hawks star goaltender and two-time Vezina Trophy winner, Charlie Gardiner, left the game because he wasn't feeling well. He died two months later of a brain hemorrhage.

The following is a list of players of note who played their first NHL game in 1933-34 (listed with their first team, asterisk(*) marks debut in playoffs):

The following is a list of players of note that played their last game in the NHL in 1933-34 (listed with their last team):

On January 28, 1934, Eddie Shore plays in his first game after the Bailey suspension. The Rangers Bun Cook scores on Tiny Thompson while Nels Stewart sprawls in the crease.

Highlights of the February 22, 1934 game between the New York Rangers and the Detroit Red Wings, won by the Rangers 3-1. Rangers second goal by #8 Cecil Dillon, assisted by #4 Vic Ripley on Detroit's Wilf Cude is shown. Rangers goalie Andy Aitkenhead plays with a hat.