These are the standings and playoffs of the 1933-34 season of the Maritime Senior Hockey League.

The league stated that the second and third place teams would play a semi final with the winner meeting the first place team in the final.

Previous to the formation of this league, each of the Maritime Provinces (New Brunswick, Prince Edward Island, & Nova Scotia) held its own provincial playoffs. This league was the only Senior A group in the region. St John Beavers therefore insisted that it could play the Moncton Hawks for the New Brunswick Senior A title. The Maritimes Amateur Hockey Association surprisingly agreed and ordered a Moncton - St John series, with the winner playing the winner of the Halifax - Charlottetown semi final.

Moncton Hawks received a bye to the final of the 1933-34 Maritimes Senior Playoffs.

Moncton Hawks
Add a photo to this gallery 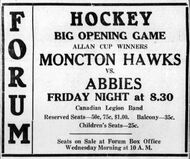 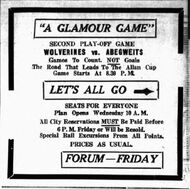 Want to fly from Charlottetown to Moncton to see a hockey game?
Add a photo to this gallery

Before the season an all-star team from Winnipeg played in all four cities of the league:

Exhibition @ Charlottetown
Add a photo to this gallery

Retrieved from "https://icehockey.fandom.com/wiki/1933-34_MSHL_Season?oldid=600699"
Community content is available under CC-BY-SA unless otherwise noted.