St. Francois Xavier and the Verdun Maple Leafs from the defunct Mount Royal Senior League were admitted in early October. The Lafontaine Bleus from the same league were not admitted at the time.

At the end of October the Montreal Columbus Club announced that it was withdrawing because it could not ice a competitive team. The Lafontaine Bleus were then admitted as a replacement.

St. Francois and Verdun were able to keep much of their roster from the previous season. However, many of Lafontaine's players had already signed with other teams in the league so they were lost to the team.

Each game played by McGill University and the Montreal Victorias was worth three points. The league played doubleheaders at the Montreal Forum on Wednesday nights and Sunday afternoons. Both McGill and the Victorias refused to play on Sundays.

During the regular season the Group played 26 doubleheaders at the Montreal Forum. These games attracted 70,823 patrons, or about 2724 per date. 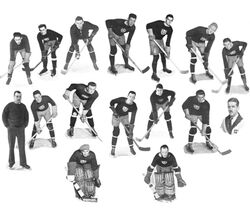 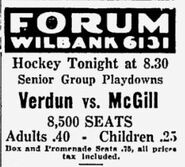 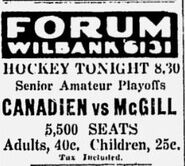 Retrieved from "https://icehockey.fandom.com/wiki/1933-34_MSG?oldid=608806"
Community content is available under CC-BY-SA unless otherwise noted.