Games were played at the Mount Royal Arena in Montreal.

McGill played its second team in this league. The University of Montreal played its first team. Both these teams also played in the 1933-34 Intermediate Intercollegiate season.

University of Montreal advanced to the 1933-34 Quebec Senior Playoffs 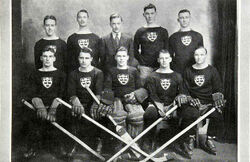 Retrieved from "https://icehockey.fandom.com/wiki/1933-34_MCDL?oldid=446289"
Community content is available under CC-BY-SA unless otherwise noted.