The 1933–34 Ottawa Senators season was the team's 16th season in the NHL and 48th season of play overall. It was their last season as the franchise would move to St. Louis, Missouri, playing as the St. Louis Eagles the next season.

Before the season, the Sens replaced head coach Cy Denneny with former defenceman Buck Boucher. Ottawa-born player Syd Howe was named captain of the team. Cooney Weiland, who led the team in scoring the previous season, would hold out, but was eventually signed, and scored only 2 goals in 9 games before the Senators sent him to the Detroit Red Wings for Carl Voss.

The Senators would be led offensively by Earl Roche, who had a team high 29 points, his brother Desse Roche would score a team high 14 goals, while Max Kaminsky would put up a team high 17 assists. Frank Finnigan chipped in with ten goals, to reach 104 in his career.

Bill Beveridge would take over the Senators' goal-tending duties, winning 13 games, while posting three shutouts and a 2.86 GAA. In the Senators last game of the season at home, against the New York Americans, Americans goalie Roy Worters was injured and not able to play after the first period. The Senators let New York use Alex Connell, the Senators backup who had not played a minute all season long, and Connell would play well enough to defeat the Senators 3–2. The last game of the season was a 2–2 draw against the Montreal Maroons at the Montreal Forum. Desse Roche scored the last goal of the original Ottawa Senators on March 17, 1934.

After the season, the Senators announced that the NHL franchise would relocate to St. Louis, Missouri where they would become the St. Louis Eagles, after 16 seasons in the NHL. To fill the Auditorium, the organization kept an Ottawa Senators club in senior league play until 1954. Ottawa would not have an NHL team again until 1992, 58 years later. 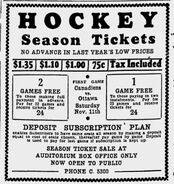 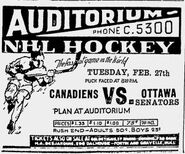 Retrieved from "https://icehockey.fandom.com/wiki/1933–34_Ottawa_Senators_season?oldid=725635"
Community content is available under CC-BY-SA unless otherwise noted.