The 1933–34 New York Rangers season was the 8th season for the team in the National Hockey League. The Rangers finished 3rd in the American Division with a 21-19-8 record. New York qualified for the Stanley Cup playoffs, where they lost to the Montreal Maroons 2–1 in a two game, total goals series.

On March 17, 1934, the Toronto Maple Leafs played the Rangers and celebrated St. Patrick's Day by declaring it "King Clancy Night." Clancy wore a special green Maple Leafs jersey complete with a shamrock on the back instead of a number. Green pants, socks and stick completed the uniform. Rangers GM/coach Lester Patrick was aghast at Clancy's attire and convinced him to wear his regular Leafs uniform after the first period.

On January 28, 1934, Eddie Shore plays in his first game after the Bailey suspension. The Rangers Bun Cook scores on Tiny Thompson while Nels Stewart watches. 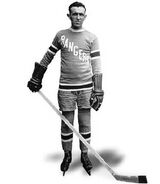 Frank Boucher led the team in scoring, won the Lady Byng Memorial Trophy, and was a First Team All-Star.
Add a photo to this gallery

Highlights of the February 22, 1934 game between the Rangers and the Detroit Red Wings, won by the Rangers 3-1. Rangers second goal by #8 Cecil Dillon, assisted by #4 Vic Ripley on Detroit's Wilf Cude is shown. Rangers goalie Andy Aitkenhead plays with a hat.

An Ice Hockey Battle (1934)
Add a photo to this gallery

Retrieved from "https://icehockey.fandom.com/wiki/1933–34_New_York_Rangers_season?oldid=725610"
Community content is available under CC-BY-SA unless otherwise noted.