Ice Hockey Wiki
Register
Don't have an account?
Sign In
Advertisement
in: Montreal Maroons seasons, 1933 in hockey, 1934 in hockey

In another move to save money via a salary dump, defenseman Lionel Conacher was traded to the Chicago Black Hawks for Ted Graham on October 1, 1933. Conacher ended up being Chicago's top scoring defenseman in the 1933-34 season, a First Team All-Star and won the 1934 Stanley Cup.

For only the second time in their history, one goalie played all the Maroons games as Dave Kerr played all 48 games. Not since winning the Stanley Cup in the 1925-26 season had this occurred when Clint Benedict played all 36 games.

Defenseman Irv Frew played his first NHL game on Christmas Day, 1933 as the Maroons lost 3-0 to the New York Rangers. Mired in fourth place with a 4-9-4 record and out of a playoff spot, Russ Blinco was called up from the minors and Herb Cain was signed from junior. Both made their NHL debuts on December 30, 1933 as the Maroons played to a 2-2 tie against their cross-town rivals, the Montreal Canadiens. Their addition to the line-up turned the Maroons season around as they went 15-9-7 for the rest of the schedule and finished in third place, making the post season.

Russ Blinco was awarded the Calder Memorial Trophy after scoring 23 points in 31 games.

Earl Robinson was the series hero as he scored both Maroon goals in the deciding game. 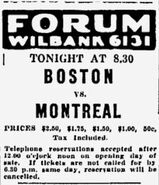 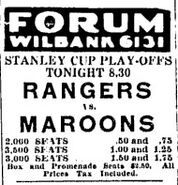 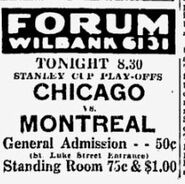