The 1933–34 Montreal Canadiens season was the team's 25th season of play. The Canadiens finished 3rd in the Canadian Division and lost in the Quarter-finals to the Chicago Black Hawks 4 goals to 3.

Star player Howie Morenz continued the decline in his play, and was placed on the second line. His ankle was seriously injured on January 2, 1934 and he missed nine games but did not play well for the rest of the season. He was the target of trade speculation at the end of the season, with the Boston Bruins, Chicago Black Hawks, Detroit Red Wings and New York Rangers all interested in him.[1]

In the first round, the Canadiens met the eventual Stanley Cup champion Chicago Black Hawks, who had placed second in the American Division. The Canadiens lost the two game total-goals series 3–4 (2–3, 1–1) with Mush March scoring the series winning goal in overtime in Game 2. Morenz missed the second game due to a broken thumb.[1] 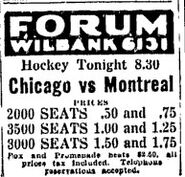